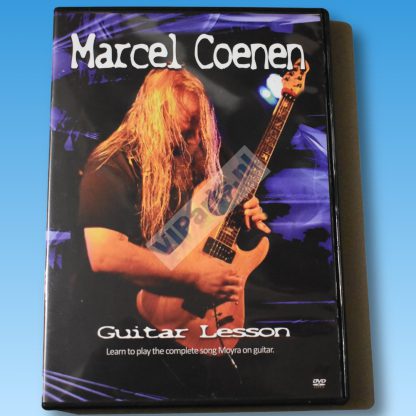 Learn to play the complete song Moyra on guitar.

Learn to play every single part of Marcel’s song “Moyra”, scale runs and patterns, and all the complete leads from the song shown note by note. Marcel shows you how to play every single part of the song, from the lightning fast arpeggio sections to the more melodic phrasing. Learn advanced lead guitar techniques like extended pentatonic, arpeggios, arppegiated traids, alternate picking, sweep picking, tapping, quintuplets and septuplets that will enhance your lead playing. The included backing track from the original recording of “Moyra” allow you to apply what you learn and put you at the center of ground breaking sound.

Marcel guides you through crucial techniques such as muted picking, string skipping and tapping, sweeping and melodic phrasing in this energetic instructional.

Marcel Coenen, born September 21 st. 1972, started to play the guitar when he was about 11 years old. He learned a lot of different guitar styles and techniques, from jazz and classical music to rock, metal and blues. He started out in a band called SPEEDICA, this band later changed their name into FORM, with this band Marcel released an album in 1994. Later he started the band LEMUR VOICE with whom he made two CD’s (“Insights” and “Divided”), this band split up in the year 2000.

In 1998 Marcel won the title as best Rock guitarist in the Netherlands during the Dutch guitar contests. Marcel recorded after winning this contest his first solo-CD “Guitartalk” which was released by Lion Music in 2003. The song “Moyra” is featured on this album. Marcel also released a second solo CD called “Colour Journey” in 2006 and a Live-DVD the same year. Also Marcel recorded an instrumental DVD in Taiwan with the name “Speed Up”.

Personal website of Marcel Coenen can be found here:

>All information & artwork are provided to VIParts by Marcel Coenen and will remain in his ownership.<

Usage without the permission from Marcel Coenen are forbidden<

There are no reviews yet.

This site uses Akismet to reduce spam. Learn how your comment data is processed.

Search by name or code